Preach On! “Getting Off Track” With A Man Of The Cloth!

**Writer’s Note** “The Recliner Report” for the JEGS Route 66 Nationals will be posted this Wednesday, June 6th. Though we’d like to say the company dog ate the original or make up some cool excuse, the truth is kinda boring. See, the “Recordings” section on our local internet provider went nuts, and we spent a lot of time on the phone with the provider trying to solve the glitch. Everything’s cool now, but we ran out of time to watch, review, write, edit, and post it today. (Monday) Please come back Wednesday for the next installment, which will happen if staffers will wash the Cheetos orange junk off their fingers long enough to type their stories. But, in its place, you’re not gonna believe the “Getting Off Track” interview we have for you! Our guest? Well, he’s like…well…dudes, he’s just flippin’ cool. ‘Nuff said. Just read. Dig it.

OK, true story. A few years back, several of the staffers were at Royal Purple Raceway in Houston, Texas, covering the NHRA SpringNationals. It was the afternoon of Elimination Sunday, and from the pressbox, we could see all the usual starting line activity taking place. Lots of teams watching their drivers, John Force on his scooter….just a lot of hustle and bustle. Then, something weird began to happen. All the folks on both sides down by the launch zone began turning towards the center as a small group of security guards could be seen surrounding someone that everyone in the area obviously was straining to locate. Sitting sorta high up in the pressbox meant that we could look down into the crowd, but all that was visible to us was a fairly small-framed man wearing sunglasses and sporting a loooonnnnggg beard. We’re talkin’ down-to-the-center-of-his-chest long. Surrounded by burly, muscled-up WWE wannabees who not-so-gently moved him through the throngs, the wrestling dudes cleared a path so the bearded guy could be up-close-and-personal to watch a couple of the matchups. It was sorta like watching the parting of the Red Sea on “The Ten Commandments.” After a few minutes, wrestlers and bearded guy left. While he was standing there, hardly anyone could have told you who had been racing. They were all too busy checking out Bearded Guy.

No one actually said the words, but all of us thought the same thing: “You gotta be freakin’ kidding me! Really? Is that who we think it is?”

It was. Bearded Guy? He was a legend…of the musical variety. Nope, it wasn’t a silky-smooth crooner who had at one time melted the hearts of women in Vegas or a world-famous rapper wearing enough bling to blind even those wearing cheap sunglasses. Nah. This cat was HUGE.

All of us had just been in the presence of true rock greatness, a guy so important that the thousands of Texans in attendance were speechless. All they could do was make weird, mumbly noises. So, who was this mystery-bearded-don’t pay attention to the races-guy? It was…the “Reverend Billy G.”

Yep, the “Rev”, known to some as Billy Gibbons, recognized by others as the guitarist for Texas blues-rock legends ZZ Top, was in the Royal Purple house. Folks were speechless. Dudes, you could hear crickets. Even the crickets were saying, “Hey, why’s it so quiet?”

Billy Gibbons. Musical icon. One-third of the trio that created such classics as “La Grange”, “Tush”, “Cheap Sunglasses”, “Sharp Dressed Man”, and “Gimme All Your Lovin”, he was in attendance to witness an NHRA event right in his own backyard. Talk about stopping traffic! His presence? Epic.

What a day. Who won those races? Didn’t matter. We saw “Reverend Billy G”!

Fast forward to 2018. All the staffers were sitting on the floor, (Their natural habitat) tossing “Getting Off Track” guest ideas back and forth. Then, from the far corner of the room came a quiet voice, saying, “I got it. Remember that day when we all saw…”

Heads turned. Mouth corners turned upwards. Lots of nodding in agreement began to take place. Nothing else needed to be said. We all just knew.

Finally, after an internet search, a couple of emails to the right person, and an explanation of the “Getting Off Track” format, success. We had our man.

Yep, we got him. We got “The Rev”, the one-and-only Billy Gibbons to go along with our shenanigans. And the results? Supercalifragilisticexpealidocious! Read on, brothers and sisters! 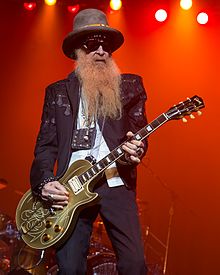 GOT–Talk about the day you got your driver’s license, and the first place you went after getting it.

BG–“The minute I turned 13, the day that precious permit was issued, legal to take the wheel, I gunned the family’s big block Pontiac heading straight to the guitar shop to check out the array of fine electric guitars. It’s been the same ever since: cars and guitars are what it’s all about.”

GOT–It’s been said that you “…bleed high octane”, and folks reading this interview understand exactly what you mean. What similar qualities do you possess with your bandmates, Frank and Dusty?

BG–“If you cut into any of us, some form of the great American art form, the blues, is most likely part of the core of our collective sonic soul. I got turned onto blues very early on having the good fortune to attend a B.B. King recording session. Dusty and Frank, as well. Both of ‘em briefly backed the late great Lightnin’ Hopkins. We’re all three avid car nuts. I’ll take a custom or hot rodded genderless Ford, Frank tends toward Modena and Dusty aims at Coventry.”

GOT–More than 50 years following your Dad’s performance in Cuba, you were asked to play the Havana Jazz Festival. During your time down there, did you notice any similarities between the car scene in Cuba and the US?

BG–“They are definitely into preservation! Hot rodding anything thing that rolls with whatever pieces that may be at hand. So impressed with Cubans ability to improvise. The cars look pretty familiar to anyone growing up in the states in the ‘50s or ‘60s. Ford and Chevy dealers here Stateside keep well-stocked parts departments… these Cuban cats have to fabricate their own and adapt whatever falls from the sky.”

GOT–Writing music means you create works of art that reflect the inner you. So, design a car for us that best represents the real “Reverend Billy G”, and what would it be named?

BG–“It starts low…really, really low. Won’t wanna see daylight between wheel and frame, for sure! And, fast. Although no need to actually drive it that way unless the need arises. We’ve actually got one now in the works with our torch master, Jimmy Shine. It’s dubbed “The Whiskey Runner” soon to hit the blacktop.”

GOT–Billy, if you and the band go on a week-long “Back To Basics” tour, and instead of flying or cruising on a tour bus, you, Frank, and Dusty travel in a car from your legendary collection. Which ride would you pick, and what makes it the right choice?

BG–“Most likely, a ’50 Ford business coupe is the way to go ‘cause this is about business, right? Then again, there’s a fixation for the ’51 V-nosed Willys wagon. Actually, I fell for Nissan’s retro Figaro… however it’s a bit too small for all of three of us so, uh… how about getting a fleet for the band?”

GOT–When you consider the different eras of drag racing, what time period interests you the most, and which driver (or drivers) come to mind?

BG–“Mid-’60s/early ‘70s is the era and the Snake vs. Mongoose rivalry pitting Don “The Snake” Prudhomme against Tom “The Mongoose” McEwen. They were genuine stars in those fantastic funny cars. Wow! The drivers and those ground pounders were the real deal!”

GOT–Let’s say you’re licensed to drive in an NHRA event. Of the four categories, (Top Fuel, Funny Car, Pro Stock, Pro Stock Motorcycle) which would you most like to drive in, and what is your reason (or reasons) for your choice?

BG–“Funny cars.. that’s what springs immediately to mind when you hear one of those old “Sunday! Sunday! Sunday!” commercials. Smoke + noise .. it’s very much akin to rock ’n’ roll.”

GOT–Your “Little ‘Ol Band From Texas” has evolved musically during an incredibly successful career. Let’s pretend you’re named the President of the NHRA. Under your guidance, what differences might we see in the future of drag racing? And by the way, who have you selected as Vice Prez?

BG–“I’d like to see a class with cars of the ’50s and ‘60s run with the basic blocks of original manufacture. You know, Chevy’s 409, Ford’s 427, the Dodge 413. For that matter, could be a class of modern, bone stockers, straight off a showroom floor…Buick Regal vs. Dodge Charger… BMW 440 vs. a Jaguar XF. Of course, the VP would be Jimmie Vaughan (Brother of the late legendary blues guitarist Stevie Ray Vaughn and member of The Fabulous Thunderbirds, and a KILLER guitar slinger in his own right!) ‘cause he likes ‘em fast and noisy, too…!”

Courtney Force to present at CMTs

Bringin’ The Noize From Illinois–It’s The Recliner Report!